US Government Teaches Anti-Piracy Skills Around The Globe

Online piracy is a global issue. Pirate sites and services tend to operate in multiple jurisdictions and are purposefully set up to evade law enforcement.

This makes it hard for police from one country to effectively crack down on a site in another. International cooperation is often required, and the US Government is one of the leaders on this front.

The US Department of Justice (DoJ) has quite a bit of experience in tracking down pirates and they are actively sharing this knowledge with countries that can use some help. This goes far beyond the occasional seminar.

A diplomatic cable obtained through a Freedom of Information request provides a relatively recent example of these efforts. The document gives an overview of anti-piracy training, provided and funded by the US Government, during the fall of 2015.

“On November 24 and 25, prosecutors and investigators from Romania, Moldova, Bulgaria, and Turkey participated in a two-day, US. Department of Justice (USDOJ)-sponsored training program on combatting online piracy.

“The program updated participants on legal issues, including data retention legislation, surrounding the investigation and prosecution of online piracy,” the cable adds.

According to the cable, piracy has become a very significant problem in Eastern Europe, costing rightsholders and governments millions of dollars in revenues. After the training, local law enforcement officers in these countries should be better equipped to deal with the problem. 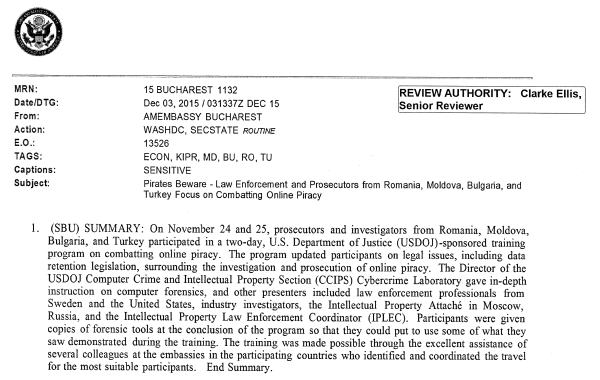 The event was put together with help from various embassies and among the presenters were law enforcement professionals from around the world.

The Director of the DoJ’s CCIPS Cybercrime Laboratory was among the speakers. He gave training on computer forensics and participants were provided with various tools to put this to use.

“Participants were given copies of forensic tools at the conclusion of the program so that they could put to use some of what they saw demonstrated during the training,” the cable reads.

While catching pirates can be quite hard already, getting them convicted is a challenge as well. Increasingly we’ve seen criminal complaints using non-copyright claims to have site owners prosecuted.

By using money laundering and tax offenses, pirates can receive tougher penalties. This was one of the talking points during the training as well.

“Participants were encouraged to consider the use of statutes such as money laundering and tax evasion, in addition to those protecting copyrights and trademarks, since these offenses are often punished more severely than standalone intellectual property crimes.”

The cable, written by the US Embassy in Bucharest, provides a lot of detail about the two-day training session. It’s also clear on the overall objective. The US wants to increase the likelihood that pirate sites are brought to justice. Not only in the homeland, but around the globe.

“By focusing approximately forty investigators and prosecutors from four countries on how they can more effectively attack rogue sites, and by connecting rights holders and their investigators with law enforcement, the chances of pirates being caught and held accountable have increased.”

While it’s hard to link the training to any concrete successes, Romanian law enforcement did shut down the country’s leading pirate site a few months later. As with a previous case in Romania, which involved the FBI, money laundering and tax evasion allegations were expected.

While it’s not out of the ordinary for international law enforcers to work together, it’s notable how coordinated the US efforts are. Earlier this week we wrote about the US pressure on Sweden to raid The Pirate Bay. And these are not isolated incidents.

While the US Department of Justice doesn’t reveal all details of its operations, it is very open about its global efforts to protect Intellectual Property. 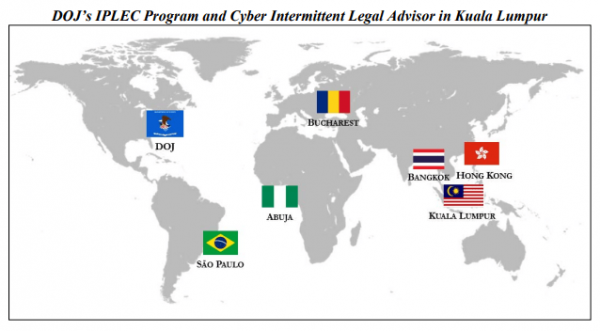 A crucial part of the Department’s international enforcement activities is the Intellectual Property Law Enforcement Coordinator (IPLEC) program, which started in 2006.

Through IPLECs, the department now has Attorneys stationed in Thailand, Hong Kong, Romania, Brazil, and Nigeria. These Attorneys keep an eye on local law enforcement and provide assistance and training, to protect US copyright holders.

“Our strategically placed coordinators draw upon their subject matter expertise to help ensure that property holders’ rights are enforced across the globe, and that the American people are protected from harmful products entering the marketplace,” Attorney General John Cronan of the Criminal Division said just last Friday.

Or to end with the title of the Romanian cable: ‘Pirates beware!’

The cable cited here was made available in response to a Freedom of Information request, which was submitted by Rachael Tackett and shared with TorrentFreak. It starts at page 47 of document 2.