With well over 150 million active users a month uTorrent is by far the most used BitTorrent client around.

The application generates income by bundling software “offers” during the install process and through in-app banner advertising.

The banner advertisements are relatively new. Parent company BitTorrent Inc. decided to include these in 2012 in order to increase its revenues, causing uproar among some of its users.

This week the company has reintroduced an ad-free version of its uTorrent client. In addition to the free ad-supported version there’s now a paid client as well, for which users are charged $4.95 per year.

Through a paid subscription users can support the developers directly without constantly being subjected to advertising.

“We’ve been busy experimenting with new ways to improve uTorrent for our users while financially supporting the amazing team that works every day to make uTorrent free for millions of people around the world,” BitTorrent’s Jordy Berson notes. 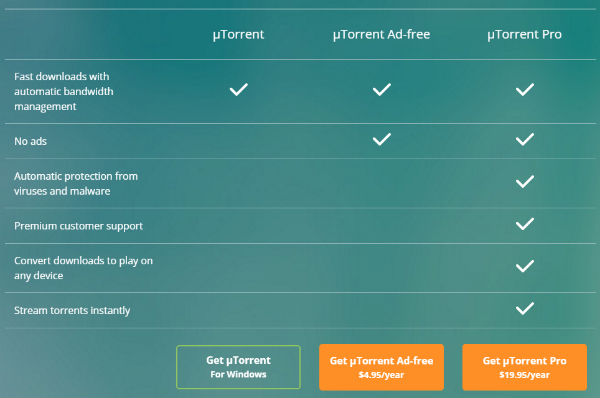 The $4.95 version doesn’t come with any of the advanced features that are available in the 19.95 Pro version, but is considerably cheaper.

“This gives users the option of avoiding any and all ads in the client. It’s exciting to us because it gives users the ability to avoid advertising at 25% of the cost that it used to be – about 5 dollars a year instead of 20 dollars,” Berson says.

The price setting is definitely reasonable for an application that millions of people use on a daily basis. However, not all BitTorrent users are eager to pay for the products they consume.

But instead of pirating a copy of uTorrent, these users can also disable the advertisements in the free version of the client, for now at least. The uTorrent team hasn’t said whether this will change in the future.

The release of the paid tier is part of uTorrent’s efforts to move away from invasive advertisements and bundled software, which led to bad PR in the past.

“We’ve never been satisfied with this revenue model. It requires compromises that detract from a premium user experience. We want to find a model that adds value to our product and our users. We want to find a better way,” the uTorrent team previously said.

Time will tell whether a paid subscription is the way to go.