With more than 100 million active users a month and a market share of nearly 50 percent, uTorrent is without doubt the most-used BitTorrent client.

Despite the success story that it is, the uTorrent development team hasn’t been sitting still in recent years. The user interface is continuously being updated and new features are launched on a frequent basis, such as the BitTorrent App studio.

Today we can add another feature to the list, as BitTorrent quietly rolled out support for external devices in the latest uTorrent alpha release. Aside from the usual bug fixes, the new release allows users to drag and drop downloaded files to Apple and Android devices, as well as the PS3 and Xbox 360 game consoles.

In addition, the latest alpha also shows the option to convert files into the appropriate formats supported by the various devices. However, TorrentFreak has learned that this tease was put in by mistake and that it will be removed in the next update.

While the device integration will become part of the stable uTorrent release in a few months, conversion will only be available for people who upgrade to the premium uTorrent version, the upcoming uTorrent Plus. 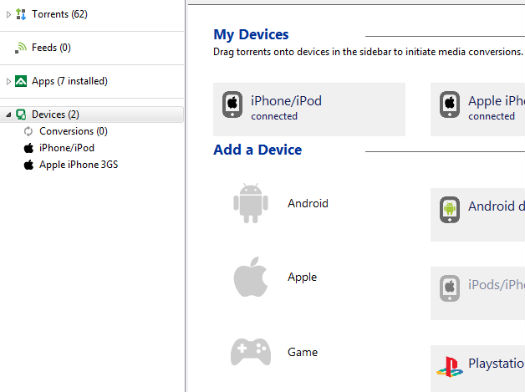 As is the case with all change, not all users are happy with the multitude of developments uTorrent has gone through in recent months. Some complain about bugs, others don’t like the new interface, and there are users who are not charmed by all the new additional features.

The uTorrent developers, however, believe that they are on the right track to making their software appeal to a wider audience. TorrentFreak was informed by BitTorrent Inc. that a lot of users specifically demanded device integration, as well as other changes that were implemented recently.

That there indeed is a demand from BitTorrent users for integration with mobiles and game consoles has been shown by uTorrent’s main competitor, Vuze. A year after Vuze added device integration millions of users had turned on this feature, and together they converted more than 100 million videos. Whether people are as excited when they have to pay for the conversion remains to be seen.

The latest 3.1 alpha is available for download now, for those who are interested in giving it a spin.