Hosting providers are generally seen as neutral intermediaries but some copyright holders believe that these companies should bear more responsibility.

This liability for online services is a hot topic on the political agenda and it’s at the center of several lawsuits in U.S. courts as well.

Over the past months, a group of independent movie companies filed a series of lawsuits against VPN providers and their hosting companies. The makers of films such as “Hunter Killer” and “Dallas Buyers Club” accuse these services of turning a blind eye to piracy.

One of the targeted companies is cloud hosting provider Sharktech, which counts several VPN providers among its customers. According to the rightsholders, the hosting provider indirectly contributed to the infringing activities of the VPNs’ subscribers.

The movie companies alerted Sharktech about this piracy activity through various copyright infringement notices, which allegedly had little impact.

“Sharktech failed to terminate the subscribers or the accounts associated with these IP addresses or take any meaningful action in response to these Notices,” the movie companies’ complaint read.

The hosting company fired back at this complaint. In July, it filed a motion to dismiss the case for failure to state a claim. The filing described the filmmakers as “opportunistic litigants” that rely on “unsupported” liability theories.

Sharktech countered that it’s at least three steps removed from the actual pirates. The company merely offers a service to VPN providers which, in turn, have customers who may or may not be infringing.

“Plaintiffs’ theory is akin to demanding that a commercial airline that supplies FedEx with supplementary cargo space should be required to terminate FedEx as a customer because a few of FedEx’s individual customers may use FedEx’s services for illegal purposes,” Sharktech argued.

While it’s clear that both sides have an entirely different view on the matter, settlement negotiations began behind the scenes. Last month, they indicated to the court that an agreement was being finalized.

This week the movie companies and Sharktech filed a stipulation to dismiss the case. Both parties agreed on a confidential settlement agreement. This means that the exact details remain unknown, except for one crucial element.

In the original complaint, the filmmakers demanded that Sharktech should block access to several popular pirate sites available through its network. According to the legal paperwork, the hosting company agreed to do so.

Specifically, Sharktech will use commercially reasonable tools to block the IP-addresses of several pirate sites including Pirate Bay, YTS, RARBG, and 1337x.

“Pursuant to 17 U.S.C. 512(j)(B)(ii) and a confidential settlement agreement, Plaintiffs have requested and Defendant Sharktech has agreed to use commercially reasonable efforts to block the following alleged piracy websites located outside of the United States, by blocking their associated, currently-known IP addresses:” 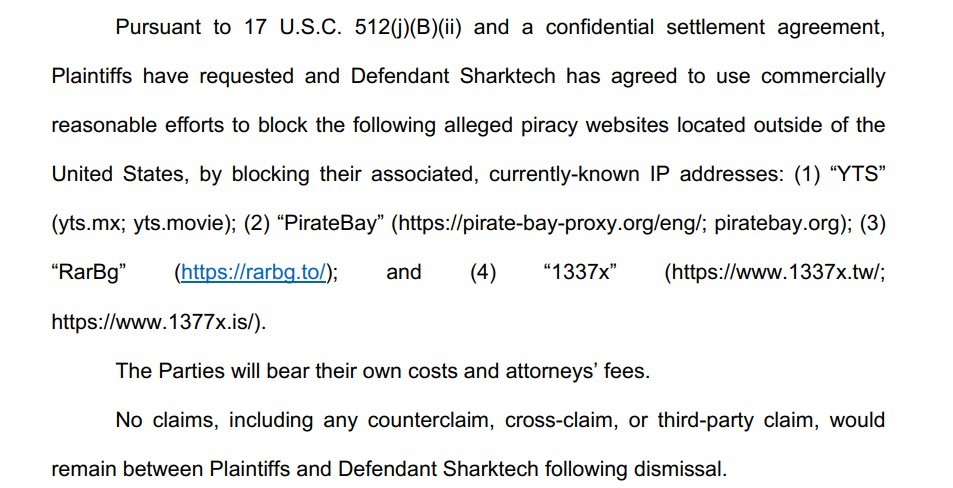 Needless to say, this is a far-reaching measure when taking into consideration that pirate site blocking is not common in the U.S. The movie companies are trying to change this through several lawsuits and this is their first ‘victory’ thus far.

There are some things that stand out, however. The legal paperwork mentions pirate-bay-proxy.org and piratebay.org, while the official thepiratebay.org domain is not included. The same applies to 1337x, which doesn’t have its main domain listed.

The above doesn’t mean that the blocking efforts will have a limited effect. On the contrary, many of the domains are accessible through shared IP-addresses offered by Cloudflare. This opens the door to collateral damage.

For example, YTS.mx resolves to the IP-address 104.31.16.120, which it shares with hundreds of other ‘pirate’ domains such as IPTorrents.ru, Flixtor.to, Putlockers.fm, and Kickass1.to. With a simple IP-address blockade, these domains will be blocked as well.

Also, it’s not just ‘piracy’ related domain names that are at risk. The targeted YTS.movie domain uses a shared Cloudflare IP-address that’s linked to over 2,000 other domains. The majority of these domains have nothing to do with piracy.

For example, YTS.movie resolves to the same IP-address as Stechfordmobility.co.uk, which is a company that sells stairlifts & mobility equipment in the UK.

This wouldn’t be the first time that shared IP addresses have resulted in overblocking. The same has happened a few times in the past and Cloudflare previously stepped in to limit such collateral damage.

TorrentFreak reached out to Sharktech for further information on how the company plans to enforce the blocking agreement. At the time of publication, we have yet to hear back.

With the settlement agreement, all claims against the hosting provider are dropped. The same doesn’t apply to VPN provider PIA and several Doe defendants that are targeted by the same complaint.