A group of movie production outfits, including affiliates of the film studios Millennium Media and Voltage Pictures, filed a lawsuit against VPN.ht in March.

The companies accused the VPN provider of promoting the piracy app Popcorn Time to its users, noting that a VPN.ht IP-address was repeatedly used to share pirated films.

After filing the original complaint, the copyright holders increased the pressure. They obtained a temporary restraining order that required PayPal to freeze the assets of VPN.ht’s operating company Wicked Technology Limited.

This order was a major setback for Wicked Technology and its owner, an Algerian citizen named Mohamed Faouani, who hoped to turn things around. In a motion to dismiss filed in May, the defendants argued that they are not subject to the jurisdiction of the Virginia federal court.

Wicked Technology and its owner are represented by attorney Benjamin Maskell, who stresses that VPN.ht didn’t specifically target people in the state. In fact, Faouani had never heard about Virginia before he was sued.

“Faouani has never traveled to the United States, and had never heard of the state of Virginia prior to this lawsuit. He does not have an interest in, use, or possess any real property in Virginia. He has not transacted any business in Virginia or contracted to supply services or things in Virginia.”

As the case appeared to head towards a ‘jurisdiction’ battle, both sides came together behind the scenes to resolve the matter out of court. In August, the parties already informed the court that they were working on a settlement, which has since been finalized.

The movie companies agreed to drop their claims against Wicked Technology, VPN.ht Limited, and Mr. Faouani in exchange for a far-reaching injunction. This proposed order and injunction was approved by Virginia District Court Judge Rossie D. Alston Jr. recently.

The VPN service will, among other things, prevent its subscribers from using the BitTorrent protocol on its US-based servers. This blockade is independent of the nature of the traffic, which could also be non-infringing.

“Within 30 days of entry of this order, the Wicked Entities are ORDERED to use their best efforts to implement technological measures designed to prevent subscribers of the VPN.ht VPN service from using the BitTorrent protocol with Wicked’s VPN servers in the United States.”

In addition to blocking BitTorrent traffic, the defendants also agree to store IP-address logs of the IP-addresses that are linked to its US servers. These logs will have to be stored for at least a year and should be able to point to specific users.

“Said log records shall include the identification information of the subscriber as stored in the records for the Wicked Entities,” the injunction reads.

While the above will already spook quite a few VPN subscribers, the injunction goes even further. VPN.ht also agreed to disclose the relevant logs when the movie companies notice that a VPN subscriber uses the service to pirate one of their films.

“In the event that Plaintiffs have confirmed infringement of the copyright protected works set forth in Exhibit 1 to the Amended Complaint (Dkt. 7) by a subscriber to Wicked’s VPN, and upon request by Plaintiffs, the Wicked Entities shall provide to Plaintiffs the log entries pertaining to such subscriber in respect of the claimed infringement.” 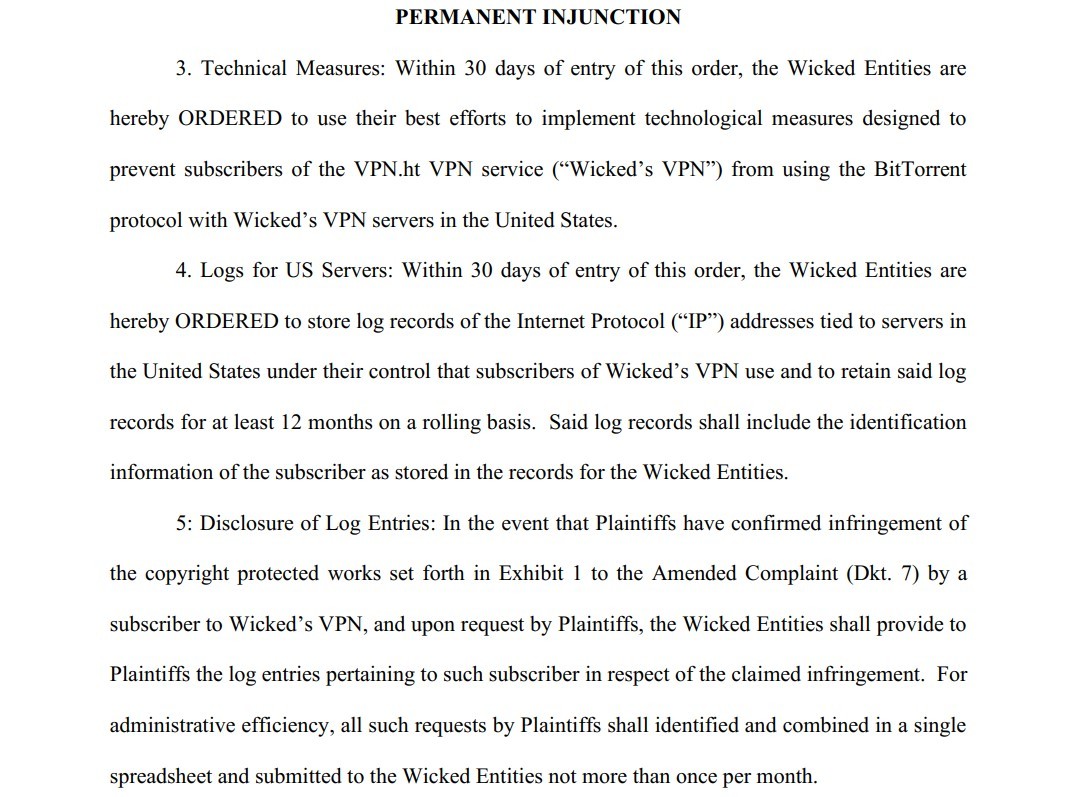 If VPN.ht accurately blocks all BitTorrent traffic on its US servers, the movie companies should not be able to identify any pirates in these log entries. That said, the agreement is a clear sign that VPN.ht’s no-log policy no longer applies to its entire network. Or does it?

Responding to the news, VPN.ht informs TorrentFreak that it will continue to keep its users private. While it agreed to the terms above, the company says that it will circumvent the measures by discontinuing its US servers.

“We do not intend to log our customers so we will stop offering US servers. We refused to share any information about our customers, which we don’t have anyway,” a VPN spokesperson informed TF.

“We are not big enough to keep fighting,” VPN.ht adds, stressing that it will continue to protect users.

The order and injunction also come with some good news for VPN.ht and its owner. Their previously frozen PayPal accounts are now unlocked. In addition, all other restrictions that were part of a preliminary injunction are lifted as well.

Most importantly perhaps, all copyright infringement claims against Wicked Technology, VPN.ht Limited, and Mr. Faouani are dismissed. This means that the lawsuit now only lists the anonymous operators of Popcorntime.app as defendants.

A copy of the order and injunction, signed by Virginia District Court Judge Rossie D. Alston Jr., is available here.

VPN.ht is not the only VPN service to be targeted with a piracy lawsuit this year. Several others, including Surfshark, VPN Unlimited, Zenmate, PIA and ExpressVPN are targeted in similar cases. There is no indication that these other providers are considering a settlement.

Update: This article was updated after publication with a response from VPN.ht and clarification that VPN.ht will stop using US servers.

VPN.ht plans to publish a press release soon, we will add that to the article when it comes in.

Given the depths that many of the trolls are willing to sink to in the name of hyper-profits, we are at an extreme disadvantage when it comes to legal budgets.

Despite extreme pressure and tactics designed to defeat us with legal fees, we never compromised on your privacy.

We will never forget it was our loyal customers who trusted us and built this company.

Your privacy has always been and remains our reason for existing. We strictly adhere to our moral code, and we would prefer to close the business instead of compromising our business integrity.

Dismiss any rumor you may have heard to the contrary. There have been zero compromises on your privacy. We fought for that and will always fight for it.

USA customers, we love you, this isn’t good-bye, we’ve got your back.

You can easily continue using our service and remain under our protection by simply using a different server. You will connect to the closest server outside of the U.S. – likely Canada or Mexico, without logging.

The full statement is available here.