Pirate Party Keeps a Seat At The European Parliament 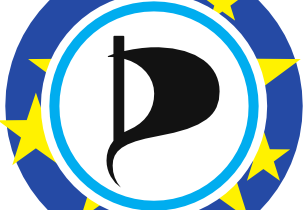 This week people from all across Europe chose their representatives for the European Parliament.

In more than a dozen countries local Pirate Parties were also present at the ballots, with serious ambitions.

During the last elections in 2009 the Pirate Party surprised friend and foe by gaining two seats at the European Parliament. This year they hoped to equal or improve upon that success, but the goal proved out of reach.

The final results show that the German Pirate Party is certain of a seat, with 1.4% of the total vote. This means that 27-year-old Julia Reda will represent the Pirates in Brussels during the next five years.

In the Czech Republic the Pirate Party came awfully close too. They achieved 4.78% of the total vote where 5% was needed, just 3,337 votes short of a seat in Brussels. The party has announced that it will appeal the 5% barrier.

In Sweden, where it all started, the Pirate Party managed 2.2% of the total vote. That’s down from 7.1% during the previous European Election and not enough for a continued stay in Brussels for the Swedish Pirates.

In Luxembourg the Pirate Party did very well with 4.23% of the total vote. However, this doesn’t translate into a seat since the country only has six seats available. The result does mean that the party will receive funding from Europe during the years to come, which was an aim they had shared with us two weeks ago.

In all the other countries where Pirates were on the ballot the achievements are also below the threshold for a seat.

This includes Finland where Pirate Bay co-founder Peter Sunde participated. Sunde is the most popular Pirate there, but the party only managed 0.7% of the vote, not enough for him to be elected.

While many had hoped for at least two seats, or more, the German seat is still quite an impressive achievement.

When the Swedish Pirate Party entered the European Parliament five years ago most people thought it was a fluke. However, the Pirates managed to stay in Brussels, supported by the votes of close to a million people all across Europe.

This sentiment is shared by Rick Falkvinge, founder of the first Pirate Party. “As a movement, we went from two seats to one, being ridiculously close to three seats,” Falkvinge tells TorrentFreak.

“Still, there’s no points for a near-hit in any game. The most important thing was that there would be Pirates in the European Parliament after this election day, and we achieved that. The story continues, and there’s representation on the inside,” he adds.