With dozens of millions of monthly views, Putlocker.is is the go-to video streaming site for many people.

Up until last weekend, the site was ranked the 252nd most-visited website on the Internet and it’s particularly popular in the United States, Canada, Australia and South Africa.

As one of the largest ‘pirate sites’ on the Internet, Putlocker is a thorn in the side of rightsholders. It’s also on the radar of the US Government after the Office of the US Trade Representative put it on its annual list of “notorious markets,” but actually cited an incorrect domain.

This week another domain issue cropped up for the site. After its Putlocker.is domain name wen’t dark late last year, the site’s recent Putlockers.ch fallback is now gone as well.

Users who try to access the site will see that it no longer loads. A Whois search reveals that the domain has been taken over by the registrar EuroDNS, who’ve pointed it to a 127.0.0.1 blackhole. 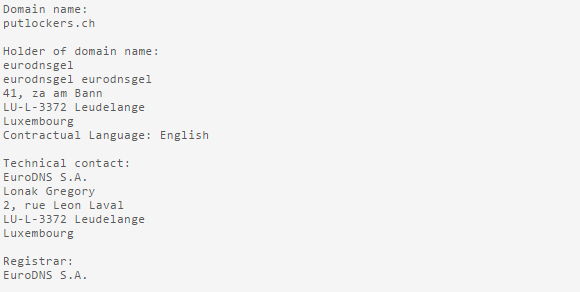 TorrentFreak reached out to EuroDNS Chief Legal Officer Luc Seufer who informed us that they were required to take this drastic measure following an order from the Tribunal d’arrondissement de Luxembourg.

The court rendered a decision in favor of the Belgian Entertainment Association last week, which required the registrar to suspend the domain. To avoid the Putlocker operator from taking it to another registrar, EuroDNS is now listed as the owner.

“The owner modification was the sole means we had at our disposal to comply with the decision which requires that EuroDNS prevent any ‘reactivation’ of this domain name until its expiration date,” Seufer informs us.

“Our customer has been duly notified and provided with a copy of the decision,” he adds.

The Putlocker team has yet to comment on the issue. The site’s official Facebook page hasn’t been updated since the downtime, despite a barrage of questions from users. The most recent message is from last week, referring to an earlier ‘attack.’

At the time the site also warned not to trust various copycats, which ironically are widely promoted elsewhere on the Facebook page now.

To find out more about the nature of the blocking order and other potential targets we contacted the Belgian Entertainment Association. However, at the time of publication, we have yet to receive a reply.

Update: The old Putlocker.is domain now appears to be back in action. Since a few months this has been registered to the same person who also registered Putlockers.ch. This is the “new” owner who took over the .is domain late last year, after the first troubles started. We’re not sure whether the site is still run by the old team or not.

Update: The court order in question also targets several other domain names, including Megashare and Solarmovie.