In 2006, Dutch musician Melchior Rietveldt was asked to compose a piece of music to be used in an anti-piracy advert. It was to be used exclusively at a local film festival.

However, when Rietveldt bought a Harry Potter DVD in 2007, he discovered his music being used in the anti-piracy ad without his permission. In fact, it had been used on dozens of DVDs both in the Netherlands and overseas.

In order to get the money he was owed, Rietveldt went to local music royalty collecting agency Buma/Stemra who had been representing him since 1988 but had failed to pay him any money for the anti-piracy piece previously registered with them.

Eventually Stemra sent Rietveldt an advance of 15,000 euros along with a promise to forward a list of all the other DVDs that the composer’s music had been used on. That list never arrived, but according to the Amsterdam Court this week it amounted to at least 71 commercial DVDs.

In January 2009, Rietveldt wrote to Stemra informing them that the amount paid thus far wouldn’t cover the amount owed. Despite much wrangling, by 2011 Stemra still hadn’t provided Rietveldt with the necessary data but did pay another 10,000 euros ‘advance’.

“This dispute lingered on for some years, but in 2012 Stemra arranged a settlement with BREIN legal parent NVPI for the unpaid royalties,” Arnoud Engelfriet, a lawyer specializing in Internet law at the ICTRecht law firm, told TorrentFreak.

“Under the settlement Stemra would receive 60,000 euros. Rietveldt sued because he had calculated he was due at least 164,974 euros.”

In June, Stemra paid Rietveld another 31,000 euros but this week the Amsterdam District Court ruled that Stemra had indeed been negligent in their handling of the case. They were fined 20,000 euros, ordered to pay Rietveldt’s legal costs, and told to continue efforts to pay all money due to the composer while keeping him fully informed of developments.

The case caused a scandal in the Netherlands last year following discussions Rietveldt had with Buma/Stemra board member Jochem Gerrits about getting the money he was owed. 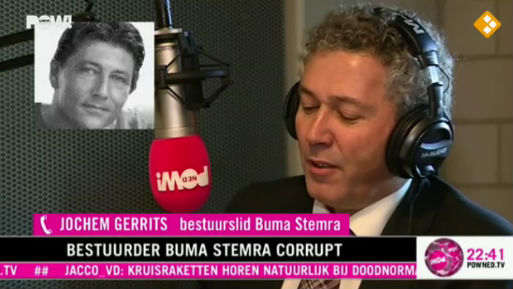 In order to help, Gerrits suggested that the composer should sign his track over to High Fashion Music, a label owned by Gerrits himself and one that would take 33% of Rietveldt’s royalties for its trouble.

“This prompted TV news organization PowNews (who had recorded the conversation) to assert corruption, but Gerrits later claimed he was speaking as director of his record company, and it is standard that a record company gets 1/3rd of the mechanical royalties,” Arnoud Engelfriet explains.

Although Gerrits resigned his position, he later initiated a defamation lawsuit against PowNews. But the embarrassing ripples caused by the case didn’t end there.

“While traditionally these societies operate as private institutions (self regulation), this affair has prompted the under secretary of state Fred Teeven to announce regulations to forbid the conflict of interest that Gerrits was in. More regulations may also appear,” Engelfriet concludes.