For more than a decade the IP Crime Group and the Intellectual Property Office have collaborated to produce an assessment of the level of IP crime in the UK. Their annual IP Crime Report details the responses of businesses, anti-piracy groups, and government agencies.

As usual, this year’s report covers all areas of IP crime, both in the physical realm and online. However, it is the latter area that appears to be causing the most concern to participating anti-piracy groups.

“Perhaps the area where IP crime statistics most often reach jaw-dropping levels is in relation to the industries providing digital content,” the report reads.

“During a sample three-month period last year, 28% of those questioned admitted their music downloads in the UK came from illegal sources. Similarly, 23% of films, 22% of software, 16% of TV and 15% of games were downloaded in breach of copyright.”

While noting that illicit music downloads have actually reduced in recent years, the report highlights areas that aren’t doing so well, TV show consumption for example.

“The reasons for the spike in TV copyright infringement appear to be, in part, technological, with ‘unofficial services’ such as uTorrent, BitTorrent, TV catch up apps and established sources such as YouTube offering content without legal certainty,” it adds.

But while several methods of obtaining free TV content online are highlighted in the report, none achieve as much attention as IPTV. While IPTV comes in several forms, the most common in respect of action in the UK involves devices loaded with the entirely legal Kodi software but augmented with illegal third-party addons.

In her report preamble, Minister for Intellectual Property Baroness Neville-Rolfe describes anti-IPTV collaboration between the Federation Against Copyright Theft, Trading Standards, and the Police, as one of the year’s operational successes. Indeed, FACT say anti-IPTV work is now their top priority.

“In their original form, these boxes are legitimate. However, with the use of apps and add-ons, they allow users to access copyright infringing material, from live TV and sports, to premium pay-for channels and newly released films. Once configured these boxes are illegal.”

FACT say they are concentrating on two areas – raising awareness in the industry and elsewhere while carrying out enforcement and disruption operations.

“In the last year FACT has worked with a wide range of partners and law enforcement bodies to tackle individuals and disrupt businesses selling illegal IPTV boxes. Enforcement action has been widespread across the UK with numerous ongoing investigations,” FACT note.

Overall, FACT say that 70% of the public complaints they receive relate to online copyright infringement. More than a quarter of all complaints now relate to IPTV and 50% of the anti-piracy group’s current investigations involve IPTV boxes. 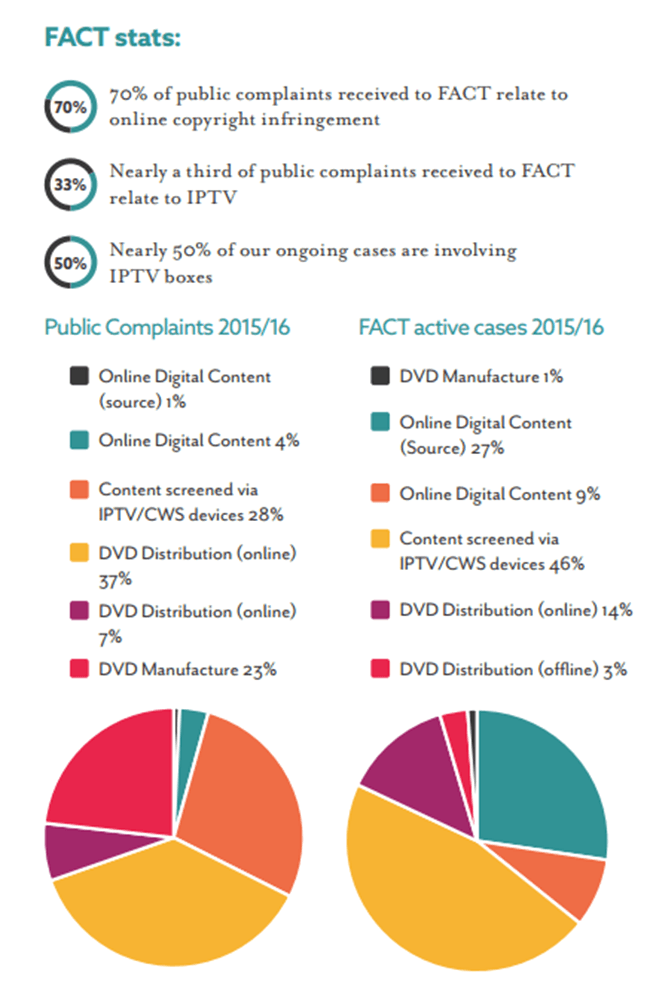 In their submission to the report, the BPI cite three key areas of concern – online piracy, physical counterfeiting, and Internet-enabled sales of infringing physical content. The former is their top priority.

“Search engines – predominantly Google – also continue to provide millions of links to infringing content and websites that are hosted by non-compliant operators and hosts that cannot be closed down have needed to be blocked in the UK under s.97A court orders (website blocking).”

The BPI notes that between January 2015 and March 2016, it submitted more than 100 million URL takedowns to Google and Bing. Counting all notices since 2011 when the BPI began the practice, the tally now sits at 200 million URLs.

“These astronomic numbers demonstrate the large quantity of infringing content that is available online and which is easily accessible to search engine users,” the BPI says.

On the web-blocking front, the BPI says it now has court orders in place to block 63 pirate sites and more than 700 related URLs, IP addresses and proxies.

The Get it Right campaign is an educational effort to advise the public on how to avoid pirate sites and spend money on genuine products. The campaign has been somewhat lukewarm thus far, but the sting in the tail has always been the threat of copyright holders sending warnings to Internet pirates.

To date, nothing has materialized on that front but hidden away on page 51 of the report is a hint that something might happen soon.

“A further component of the ‘Get it Right’ campaign is a subscriber alert programme that will, starting by the end of 2016, advise ISPs’ residential subscribers when their accounts are believed to have been used to infringe copyright,” the report reads.

“Account holders will receive an Alert from their ISP, advising them that unlawful uploading of a copyright content file may have taken place on their internet connection and offering advice on where to find legitimate sources of content.”

Overall, the tone of the report suggests a huge threat from IP crime but one that’s being effectively tackled by groups such as FACT, BPI, the Police Intellectual Property Crime Unit, and various educational initiatives. Only time will tell if next year’s report will retain the optimism.