The site received millions of visitors per day which prompted none other than the MPAA to label it “the most popular illegal site in the world.”

The site offered access to pretty much all popular movies and TV shows, most in reasonable quality. However, it also advertised another site, WatchAsap.com, which offered the best video quality for a monthly subscription.

Many people believed that both sites were closely connected. While that may have been the case, WatchAsap remained online when 123movies decided to shut down earlier this year.

The shutdown happened just days after the MPAA visited Vietnamese officials. Not entirely coincidentally, perhaps, as we later learned that the site folded in response to a criminal investigation by the authorities of Vietnam, where the site’s owners were allegedly based.

“An important development in 2018 was the shuttering of a ring of piracy services that had operated under the names 123movies, 123movieshub, gostream, and gomovies following the launch of a criminal investigation in Vietnam and significant industry engagement,” the MPAA explained.

While WatchAsap remained online for several months, the site’s homepage changed drastically this month. Instead of paid access to HD streams, users are now welcomed by an ominous seizure banner.

“This domain name associated with the website WatchAsap.com has been seized pursuant to an order issued by the U.S. District Court,” it reads, adding that a federal grand jury indicted several individuals for related crimes. 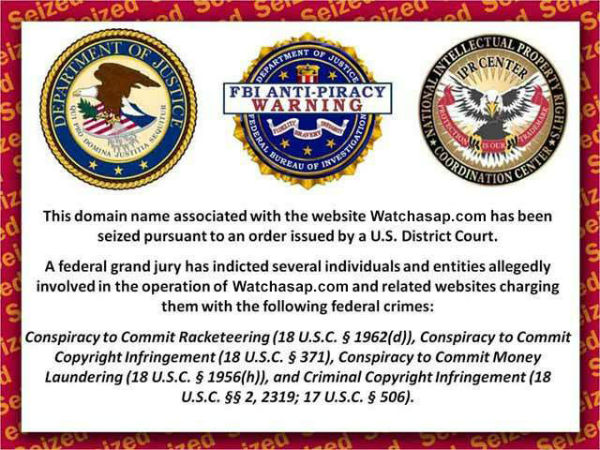 This type of banner has been used in the past for criminal investigations. In fact, the banner previously displayed at Megaupload.com was identical, apart from the name of the website.

As far as we can see the image hasn’t been doctored and WatchAsap.com shouldn’t have any reason to implicate itself in a crime, but thus far we haven’t seen any public announcement of a related indictment.

Further complicating the matter is the fact that the domain WHOIS hasn’t been updated to indicate a seizure. Also, the site still uses Cloudflare’s nameservers, which is unusual as well, compared to previous domain takeovers.

In theory, a Federal Court may have instructed Cloudflare to point the site to a server that’s controlled by the feds, of course, but there’s no confirmation of that either.

To resolve this mystery, TorrentFreak reached out to the Department of Justice and the IPR Center, whose seals are prominently featured on the shutdown banner. After a week had passed a reminder was sent, but we have yet to hear back.

It might be that we received no response because the court records are still sealed, or that it’s all an elaborate hoax. Either way, it’s highly unusual.

What we do know is that whoever is responsible for placing that banner didn’t do a very good job.

As it turns out, they forgot to redirect the site’s www traffic. At the time of writing, people who type in www.watchasap.com are sent to another pirate site called YesMovies instead. That site is not too dissimilar from the original 123movies…

Update November 25: The redirect is no longer working as the www. A records are removed.